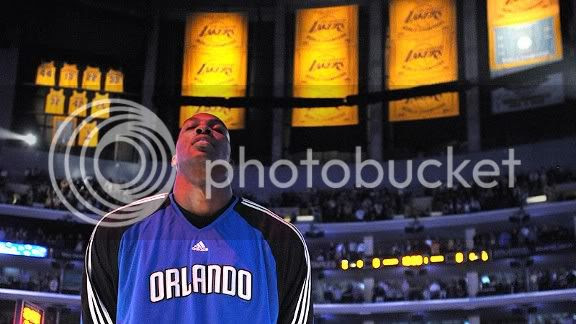 So the deal is finally done !! The LA Lakers have just landed Dwight Howard in a trade involving 4 teams and several players being moved around. With out a doubt the LA Lakers just highly improved their chances of winning some more championship tittles and now the Kobe vs LeBron finals that we have all be waiting for is now in sight. The Lakers will send All-Star center Andrew Bynum to the Philadelphia 76ers, who also will receive shooting guard Jason Richardson from the Magic. The 76ers will send guard Andre Iguodala to the Denver Nuggets. The Magic will receive Arron Afflalo, Al Harrington, Nikola Vucevic, rookie swingman Moe Harkless, forward Josh McRoberts, forward Christian Eyenga, three protected first-round draft picks and a 2013 second-round pick from the Nuggets. In addition to Howard, the Lakers will also receive Earl Clark and Chris Duhon from the Magic. This is going to be a hell of an NBA season that can't start any sooner !!!
Posted by D. Cole Magazine at 4:01 PM

Email ThisBlogThis!Share to TwitterShare to FacebookShare to Pinterest
Labels: Culture